Posted by Colin on February 12, 2014
Posted in: Ale, Festival/Event, Uncategorized. Leave a comment

As you can guess, a beer festival isn’t the kind of place where you can make a lot of notes on the beers you have tried so there isn’t a lot of descriptions for these.

First up was me mis-reading a sign and asking for a Blue Monkey (the first drink choice is always done by a name that gets my attention).  This happened to be the brewers name and made me look rather silly.  After re-reading the signs I went for 99 Red Baboons.  Next was a trip over to the Strong Beers table and a taste of Skullsplitter.  At 8.5% its not silly strong but tasted a lot better than some other drinks I’ve had at that percentage (yes Kestral, i’m looking at you, you foul tasting bastard).  A quick fire alarm evacuation later and it was back to the Strong Beer table for a Doppelbock.  I didn’t get which brewery it was from but it tastes like the Smoked German beer we discovered at Ealing but without the smoked element.  From here I can’t remember the order (can’t think why) so it just a list.  Given my fondness for porters, Devil’s Dyke Honey Porter was particularly nice.  Dave was had purely because of the name.  I tried Summer Lightning due to a recommendation by the landlord of The Royal George.  XP was nice and refreshing and bought due to its namesake.  Pump House Pale Ale’s description said a hint of citrus aroma, thats enough to get me to try it.  Same goes for Black Troll.  And then we have Rat of Kahn. 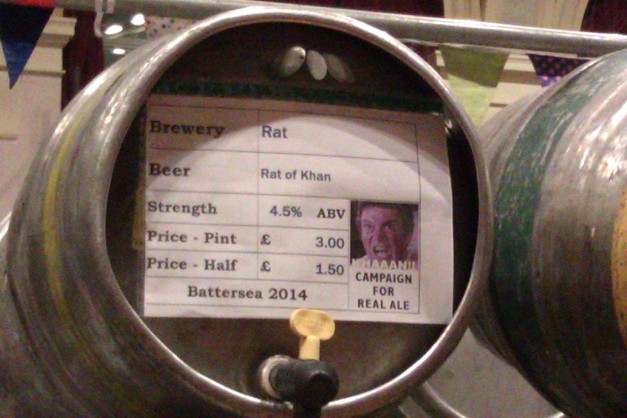 Always nice to leave one of these events having not had a bad beer.