Next up, Saffron Brewery’s Flying Serpent at 4.5% 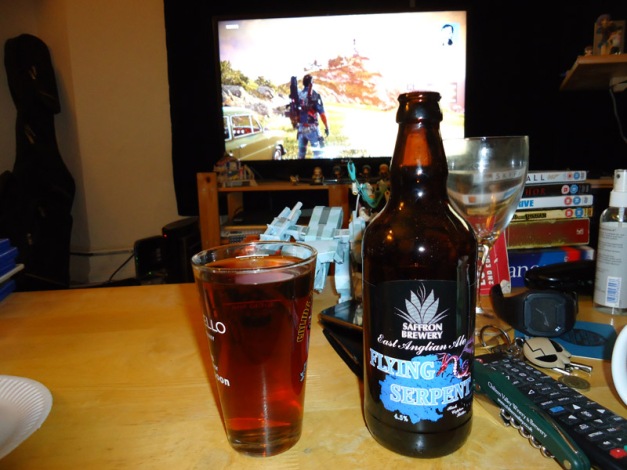 Not too much to say about this one.  On the label its advertised as a rich copper bitter.  I didn’t know what that meant, but after tasting, its what I would describe as your bog standard bitter.  Bacause of that, I find it hard to place the actual taste.  It just tastes like a bitter.  The taste doesn’t hang too long either.  Nothing wrong with the Flying Serpent just nothing stands out.  Oddly, the smell reminds me of 1p’s and 2p’s.  On the plus side, its one of the larger bottles I’ve got so it lasted a while.

And it might just be me but loads the the vehicles handle like arse in Just Cause 3.  I don’t remember the second one having difficult to drive cars.  Though with the wingsuit and parachute, cars aren’t really needed so much.

Also, Shadow Complex Remastered is free on PC til Christmas.  I’m looking forward to having another go at it.  You just need to have the Epic Games Launcher.
https://www.epicgames.com/shadowcomplex/