Posted by Colin on February 7, 2017
Posted in: Anime. Leave a comment 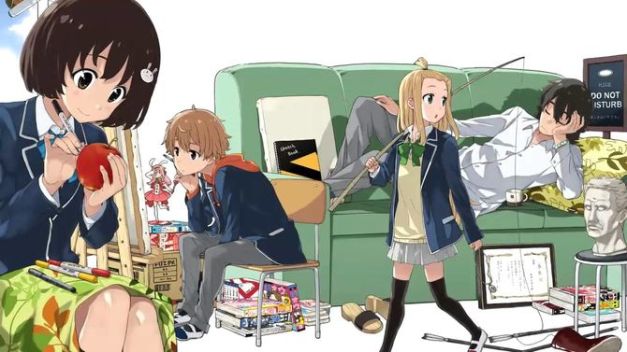 The title translates to This Art Club Has A Problem!  Its a light comedy about the members of the art club at school.  Usami (far left) is the only person in the club that takes it seriously, trying to improve her art.  Subaru (second from left) is great at drawing but he is only interested in drawing the ultimate 2D moe girl.  To make things worse for Usami, the club president (far right) just sleeps all the time and Collette (second from right) just turns up to make trouble.  Add in Usami’s crush on Subaru and you have the basis for the series.

Out of all the shows I have written up so far, this has been the first that I have yet to finish (I have three episodes left to watch).  Not because its bad, I just didn’t have the burning desire to make sure I was up to date with it.  It’s not the sort of show where your going to be spoiled on the plot.  The only significant thing that’s happened so far is a chuunibyou girl has turned up to rival Usami, but even that hasn’t gone anywhere yet.  Maybe it all changes in the final few episodes.

For a light comedy, its fine.  There are enough gags to make you not feel like your wasting your time, but not enough to make desperate for more.