Here we are, the last day before Christmas and the final beer.  The last beet is Beerfoot from Amundsen Bryggeri.  A grapefruit saison at 4%, which is designed to invoke summer.

Living up to its style, you can smell and taste the grapefruit.  There is a pleasant tang to it as well.  Quite the quaffable one, this is.

With that, another year is finished.  At least there wasn’t a tragic beer this run.  A big thank you to everyone that visited the site and have a merry Christmas.  If you don’t celebrate Christmas, have a nice couple of days!

This evening’s beer is Hobo Chic by the Dry & Bitter Brewing Company.  A double India Pale Ale at a hefty 8%.  Though in the description on the bottle, they call it an imperial IPA.  This also uses two of the same hops that yesterday’s Thirsty Frontier (citra and simcoe) but to a very different effect.

When I first poured this beer, the smell was an extremely sweet pineapple smell.  Now it’s been open for a little while, this has almost completely died away.  That initial sweet smell made me think this would be light and fruity.  The taste is actually very tart and sour hoppiness and hangs around for a while.  It also has a chalky quality I’m not fond of.  If you hold it up to the light, there is also a lot of sediment floating around (this can also be seen in the picture above).  It’s not a bad beer, though I’m not sure if I would choose it again.  I think some of it comes down to being fooled by the initial sweet smell (insert your favourite trap meme below). 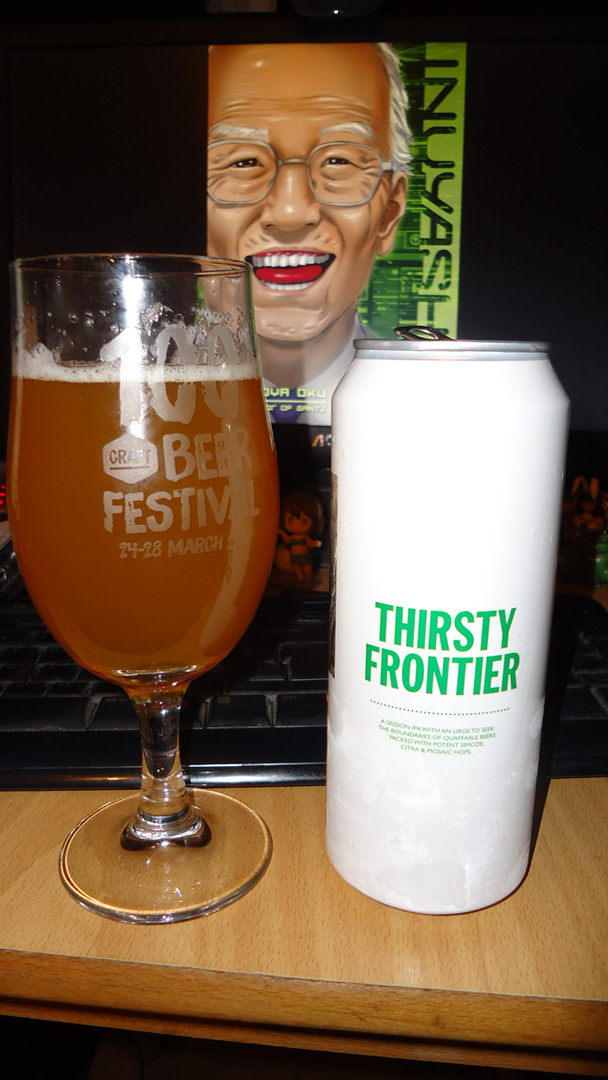 I like this beer a lot.  As I have mentioned before, I am a big fan of Punk IPA, and this is quite close to that.  Thirsty Frontier by To ∅l  is tonight’s beer.  A session IPA at 4.5%.

The smell is not just hints, but a lot of citrus.  There is less citrus in the taste as it seems to be balanced out with the hops.  To quote Ron Burgundy “This goes down smooth”.  Recommended. 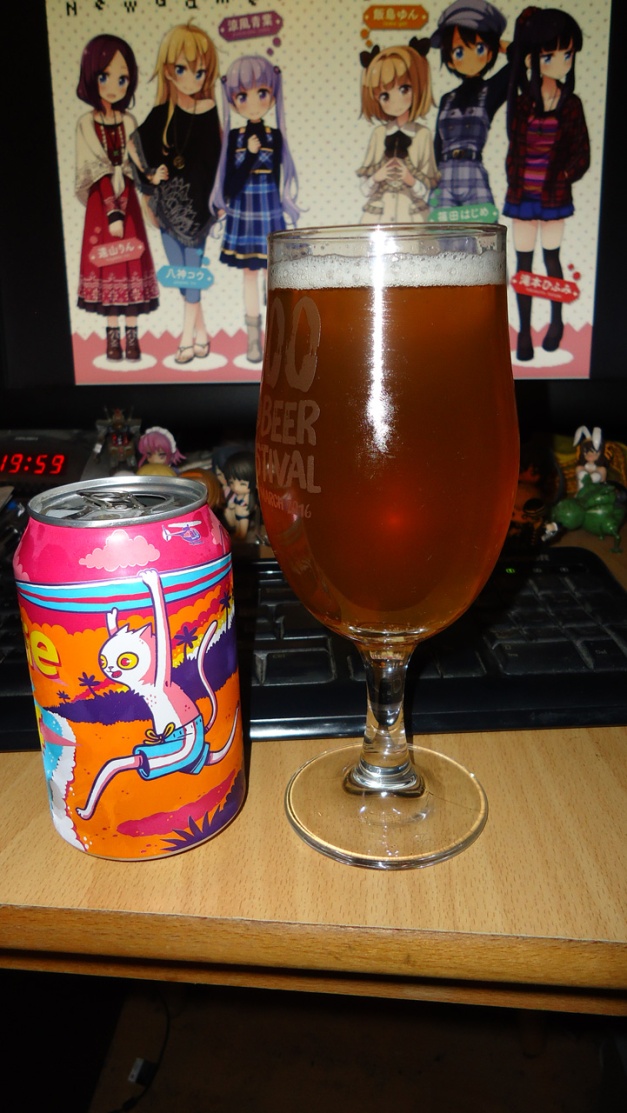 Today we have Charlie Don’t Surf by the Alphabet Brewing Co.  A session IPA at 4%.  I’m assuming the cat on the can is Charlie but who knows. 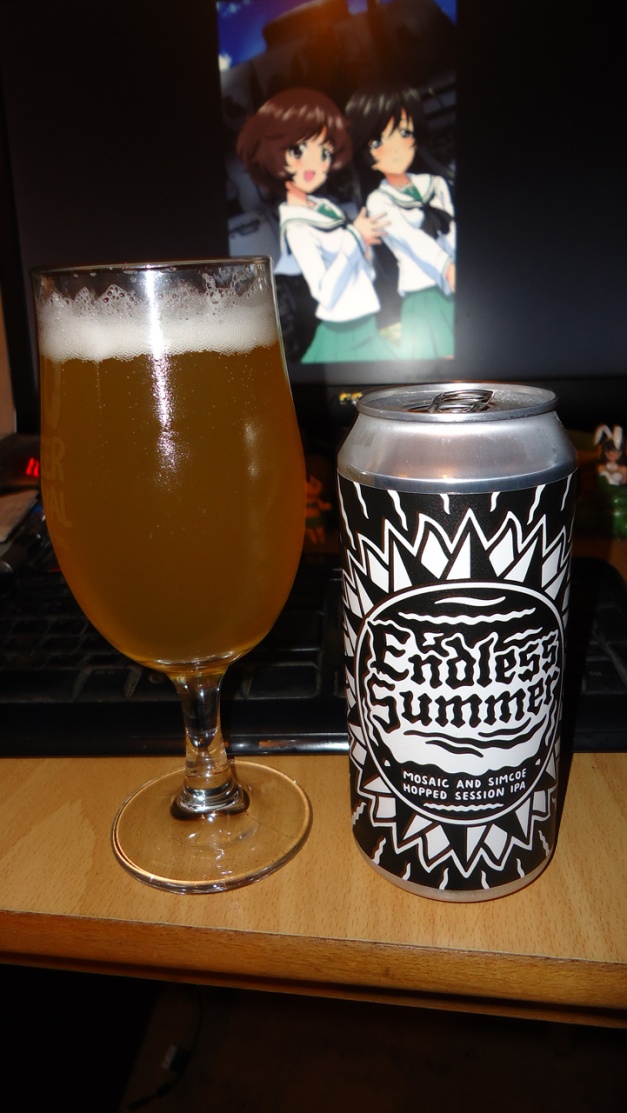 A non bland session beer?  That sound’s good to me.  Here we have Endless Summer by the Black Iris Brewery.   A session IPA at 4.5%.

The first taste really reminded me of a lighter version of Punk IPA, but that has quickly changed.  There is light floral hints to the smell.  The taste is difficult for me to pick out, but its both sharp and sour without being a distraction.  As I get further into this, there is a hint of fruity/citrus.  This is one I would be interested in trying in a session to see if the flavour alters any more.

I was hopeful for this one as the clerk in the shop explained when they got the delivery he instantly bought six cans.

TROPICAL STOUT!  Add in some nice artwork on the can and you got me.  Tonight’s beer is Cloudwater’s Tropical Stout at an impressive 8%.

After all the beers I had earlier that had a citrus smell to them, I was expecting the same from this one.  Nope, it smells malty.  It tastes like a stout and still no hint of the tropical namesake.  Though for a stout, it is quite a clean drink with a pleasant aftertaste (assuming you like stouts). 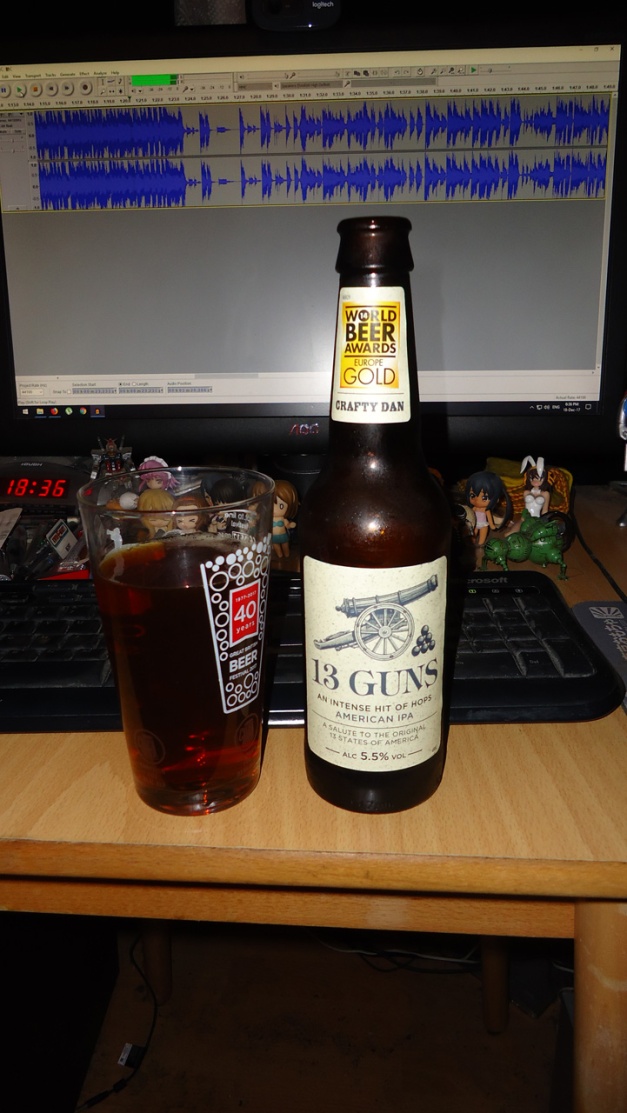 Given the gold award on the neck of the bottle, I was expecting more from 13 Guns by Thwaites Brewery.  It is a American IPA at 5.5%.

Much like yesterday’s entry, there isn’t much to this one.  No smell to it.  The “hit of hops” listed on the label is there at the start but it has faded over the tasting.  By no means the worst beer I’ve had but it doesn’t stand out.

“It’s like drinking beer with a mouth full of Opal Fruits”.  That’s Spike’s verdict of Apocalyptic Thunder Juice, an IPA at 6.5%

The smell is quite hoppy and I was surprised with the fruitiness in the taste.  Apologies for the shortness of this one but Brewdog has many beers to try. 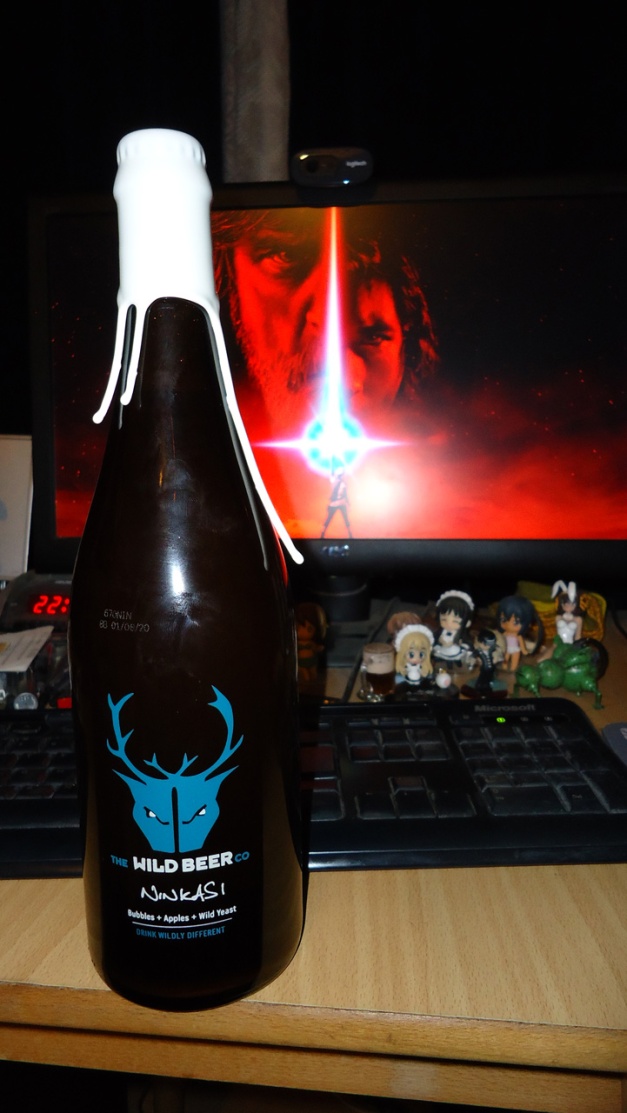 Apologies up front, this is going to be a bit of a rough one.  Tonight’s beer is Ninkasi from the Wild Beer Co.  Up front it states “Bubbles, Apples and Wild Yeast”, but what it doesn’t advertise is the 9%.  Also, this bottle is even bigger that yesterdays.

I’m calling this a rough one as my flat mate was kind enough to give me one of his free employee cinema tickets and we went and watched The Last Jedi.  We then went to the pub to discuss the film and had several pints.  Which means this large volume of 9% is going down rather fast.  I’ll probably be found asleep in the kitchen with a burnt to a crisp pizza later.

As for the beer, it really minds me of Belgian beers, particularly Leffe, in both taste and smell.  The previous mixture of ale and stout (not in the same glass, I’m not a monster) isn’t helping in picking out specific smells and tastes for this one.

Now that’s a decent sized bottle of beer!  Today we have Slot Machine from Brew Dog.  A red rye IPA at 5.2%.

Now this might sound odd but the smell is definitely a Brew Dog beer.  Not sure if it’s just me but I have found there is a distinct smell to all their beers.  The taste is hoppy and sour.  I will be interested to see if the “rye spiciness” mentioned on the label surfaces as I get further down the bottle.